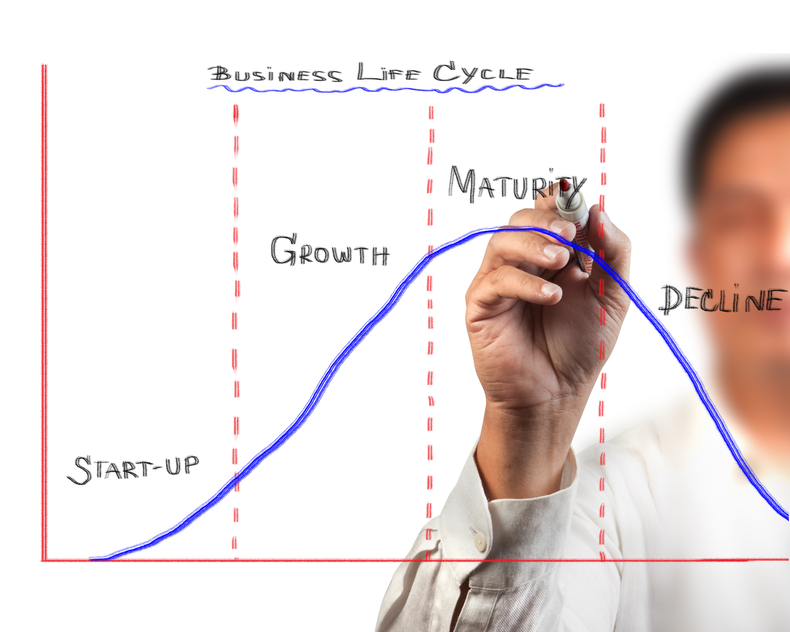 Determine where your business, organization or country is on the life cycle.

Everything has a life cycle.  A person, a company, a country.

Imagine this lifecycle as a bell shaped curve, and let’s relate this to all three of the above; a person, a company and a country.

In every case there is a birth, a growth spurt, a teenage period, adulthood, midlife, later life, retirement and a death.

The need to achieve is very evident in the early part of the upside of this curve.

A toddler tries to do everything.  He grasps at everything.  If he fails, he might try other ways to advance, but the need to perform and achieve is there.  The drive is to achieve, and the same applies to a company or a country.

As a child grows he/she goes through the teenage years during which time various behavioral patterns are reinforced, ultimately resulting in an adult who has varying needs.  One adult may have a greater need to achieve than another adult who may just want to get along with others, or yet another adult whose need may be to direct and control others.

The manifestation of these needs produces consequences.

Affiliation driven persons (the majority) are those people who like people to be happy and to get along and to live in peace harmony and goodwill.

A third group (the Power people) have a great need to control others.

Depending on what need is prevalent at the time, then that need will dictate the outcome of the activity.

As long as there is an achievement need in a person, a business, an organization or a country, there will be progress. This need coincides with the upward curve of the life cycle.

As soon as the need for affiliation becomes predominant and takes over there is a general relaxation and because there is less pressure, things take longer and less things may actually get done.

Any society that enforces a “we must all be equal” strategy immediately passes the midpoint of the life cycle and starts the slide downward towards ultimate death.  Once an achievement approach is supplanted by an affiliation (equal) or a resentment (power) approach, economic activity deteriorates and decline ensues.

This process could take a few years or a few decades, but once you remove the achievement/reward approach out of a person or a company or a country’s life cycle, and you replace it with a resentment/demand approach, evidence of the gradual slide will become increasingly clear on an almost daily basis.

The minute that benefits and entitlements become the focus of existence, the person or entity crosses the apex of the lifecycle chart and the decline stage or the latter part of the lifecycle is entered.

Being non-confrontational becomes the norm. We need to be friendly to everyone, respect their points of view even if it conflicts with our norms or mores or ethics.  Political correctness becomes the rule.  Just don’t stand up for anything.  Don’t reward winning kids-give everyone a prize for showing up.  The entitlement mentality develops as we head further down the wrong side of the life cycle.  Shorter working hours, more benefits and greater care becomes the norm.

It is at this stage that those with a need to impose their will onto others, the power players, seem to emerge from nowhere.  They take advantage of those with a high need to please others, and they start to control them, not to improve the situation for those people, but rather to enhance their own position of power.  This can be clearly seen in certain companies and countries.

The point here is that achievement is prevalent on the upside of the life cycle curve and increasingly absent on the down cycle of the curve.  The trend can be reversed by getting achievers on board to influence or change the prevailing culture before it is too late.

If the trend is not reversed the power players will continue to ride the company or country for their own benefit, thus hastening the demise.

The act of change is a very difficult one, especially if you wish to reverse a rapidly growing negative trend.  If however, things are generally good, then the slide downwards is more gradual is less visible but will still continue unabated.

Someone once said, “When things stop growing, they begin to die.”

Only severe turbulence will cause a highly motivated need to change.

Reflect on your company, the family business, your favorite organization and your country. Using the above principles, decide where it is on the life cycle and what you are going to do about it.